I moved to the Palouse in 1979. It took me 36 years to get around to visiting Rosalia, although I’ve driven past the turnoffs into the town more than a thousand times on trips to and from Spokane. And that, in a nutshell, is Rosalia’s problem. It’s too close to Spokane, and just far enough away from the more populous cities of Pullman-Moscow, Colfax, and Palouse to be a convenient stop for most.
The site of a short battle between United States Army forces and warriors of the Coeur d’Alene, Palouse, and Spokane Indian tribes in May of 1858, the town itself was founded in 1870 by T. J. Favorite, who named it for his wife, Rosalia (Wikipedia). Its population peaked at 767 in 1910, according to U.S. Census Bureau figures; today it’s home to around 550 sturdy souls, some of whom seem determined to make a go of it.
My friend Dan and I decided to make a stop there on a recent Saturday morning to take some pictures and enjoy a late breakfast at the Brass Rail Tavern, the only restaurant left in Rosalia (though signs above vacant storefronts indicate that not so very long ago, there were several such places). Bob, the proprietor, indicated that apart from the town’s annual Battle Days festival in June, business hasn’t exactly been brisk; he’s gone back to working at a job in Spokane several days a week “to help support the tavern” and allow him to remain a resident of this historic farm town. His determination was echoed by Pat, a lady we met who recently opened a book and gift shop inside the building she’d purchased and was renovating, one of numerous vacant buildings downtown. Occasionally a passerby would stop to check out the contents of several boxes Pat had set out on the sidewalk in front of her store with a sign that read “Free Books and Videos.”
Among the subjects that caught our attention were the 1923 Texaco gas station that doubles as the town’s visitors center, the ornate four-faced clock dating back to the 1905 Portland World’s Fair, a fine old house on the far east end of Whitman St. (the town’s main drag), and of course, “The Bridge.”
The Rosalia Railroad Bridge always seems to catch my eye whenever I drive past it, as I have done countless times over the years.  It was the main reason I wanted to stop at Rosalia to take pictures.  I snapped dozens of shots at various distances and from various vantage points, but not one of them comes close to conveying its awesomeness.  I’m not alone; less than a handful of images that I’ve seen over the years have done it justice, maybe one or two. So, I’m determined to return to Rosalia (or to allow time to stop there on my way to or from Spokane) to take another crack at it. If you happen to be visiting the area and are up to the challenge, I hope you’ll give The Bridge – and the rest of Rosalia – some attention. 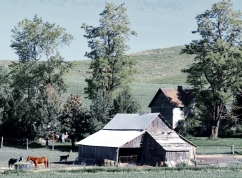 See a photograph you’d like for yourself or a gift?  We offer prints and enlargements in a variety of sizes; matted or loose, on canvas or metal, and as notecards with matching envelopes, with prices starting at under $5.00 plus shipping. Please use the contact form to let us know what you’re interested in.  Thank you for looking!